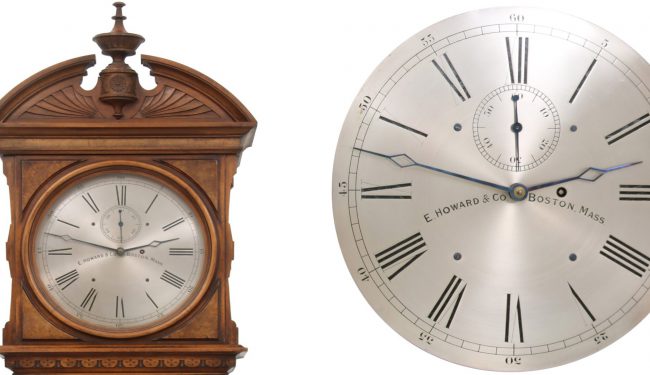 E. Howard & Co. clocks are valuable antique timepieces that are consistently sought after in the market. If you want to sell your E. Howard & Co. clock, Fontaine’s Auction Gallery has exceptional consignment and auction services to help you realize the highest value. Below are some examples of clocks we’ve sold in the past.

With his financial partner Charles Rice, Howard moved timepieces, tools and machinery that were in progress at the defunct Boston Watch Company to their factory in Roxbury, Massachusetts. Their first year in operation was spent retooling the machines to accommodate Howard’s designs and finishing the remaining movements. Although the company’s name changed many times during its history, the timepieces were always signed “E. Howard & Co.”

In 1858, Howard produced the first watch of his own design. These watches featured a top plate with two sections — known as a split plate — and six pillars instead of the typical four pillars. In 1868, he introduced the first stem-winding watch, which was likely the first of its kind in the U.S. market. Howard also created quality regulators and wall clocks in his unique style.

Howard retired in 1882, but the company continued to produce his watch movements until 1903 when production ceased. At that time, the Keystone Watch Case Co. bought the rights to the Howard name and began producing a line of watches with the label “E. Howard Watch Co., Boston, U.S.A.” Today, these watches are referred to as Keystone-Howards, and they are not the same as E. Howard & Co. watches.

Although the Howard name continued to be bought and sold over the years, the watches and clocks that garner the most interest and value in the antique market today are the E. Howard & Co. items produced by Howard himself in the company’s heyday of 1858 through the 1890s.

The three most popular types of E. Howard & Co. products include:

Regulators: E. Howard & Co. regulators feature the finest materials, including oak and mahogany. The company made them in standing and hanging versions in different designs.
Tower Clocks: Usually mounted in a clock tower or high in the wall of a building.
Watchman Clocks: Had the purpose of leaving a record of the time, date and checkpoint.
Electro-Mechanical Master Clocks: These have electronic movements.
Luxury watches: These include pocket watches of various types, from open face to solid gold, all with Howard’s six-pillar design.

Rarity: If the clock or watch was unusual or unique compared to other E. Howard & Co. items, or if it is one of only a few of its type, the item will be considered more rare and valuable.
Authenticity: The “E. Howard & Co.” signature and provenance, or documented history of ownership can constitute reliable proof of authenticity, but some aren’t always signed, so it takes an expert to examine many different factors to determine if it is an E. Howard clock or not.
Condition: The physical state of the item is a major factor in determining its worth. The closer it is to its original condition, the better. Everything from chips, cracks and dents to broken or replaced parts can all diminish the value.

If you’re interested in an appraisal for E. Howard & Co. clocks, Fontaine’s Auction Gallery provides valuations free of charge. You can email us photos and information, complete our auction estimate form or set up an appointment for an in-person evaluation.

Many 19th-century clocks were cheaply made for mass production, but E. Howard & Co. was one of the few clock companies dedicated to precise designs, high-quality materials and expert craftsmanship. Because of their exceptional workmanship, E. Howard & Co. clocks and watches are very desirable in the antique market.

Edward Howard was also a pioneer in the field of horology, making his original pieces that much more valuable. High-quality clocks and watches also grow in value over time, so these pieces continue to gain popularity today.

People consign with us for many reasons, including our:

Global audience: We make our live auctions accessible to people across the globe because of our multiple, convenient methods of participation and global reputation as a trusted auction house.
One flat rate: We charge one flat rate for our services — amongst the best in the auction industry. There are no hidden fees, and you won’t be bogged down by numerous charges as you would elsewhere.
Marketing: At Fontaine’s Auction Gallery, we know that successful marketing is key to a profitable auction. Our team of marketing strategists builds the buzz early and starts advertising weeks in advance of other major auction houses.
Customer service: With our personalized approach and expert knowledge, the consignment process is easy and straightforward.
For more information about how to consign your E. Howard & Co. clock at auction, contact us today.

Fontaine’s Auction Gallery has over five decades of experience working with antique buyers and sellers from all over the world. With our in-depth market knowledge, we can help you attain your E. Howard & Co. clock’s full sales potential.